A new study finds that people with this pet almost doubled their chances of contracting the virus.

There's plenty of documented benefits of having pets around, and that's especially true during lockdown or quarantine, where having the company of a four-legged friend could help lift spirits or keep you company. But a new study has found that at least one type of pet could be dangerous amid the pandemic: Having a dog increases your chances of catching COVID by nearly 80 percent. Read on to find out what kind of risk fido might be creating in your home, and for more on signs you may be sick, check out If You Notice These 3 Strange Symptoms, You May Have COVID, Study Says.

The recent discovery comes thanks to a study out of the University of Granada (UGR) and the Andalusian School of Public Health in Spain, which analyzed data from 2,086 subjects and their behavior patterns during the country's strict lockdown between March and May of 2020. The findings showed that respondents who lived with a dog were 78 percent more likely to catch COVID-19, making it one of the factors that was most correlated with an increased risk of contracting the disease.

The study's authors say that it's not entirely certain exactly how canine ownership creates such a heightened risk, especially in comparison to other pets, which seemed to have no significant effect on owners' likelihood of catching the novel coronavirus. However, the researchers do warn that a likely connection exists between taking dogs for walks and exposure to the virus in public.

"In the midst of a pandemic and in the absence of an effective treatment or vaccine, preventive hygiene measures are the only salvation, and these measures should also be applied to dogs, which, according to our study, appear to directly or indirectly increase the risk of contracting the virus," warned Cristina Sánchez González, a researcher at the UGR's Biomedical Research Centre and the main author of the study.

Unfortunately, owning a dog is not the only thing that can increase your risk of catching COVID. Read on for other behaviors that putting you in harm's way, and for more on how you can help protect your pup in another way, check out If You Feed Your Dog This, the FDA Says to Stop Immediately.

1
Being deficient in vitamin D

Staying on top of your health has reached a new level of importance in the months since the novel coronavirus pandemic began. And, according to mounting research, making sure your body has enough of the right vitamins can drastically improve your chances of beating COVID—or even avoiding it altogether. A study published by the Journal of the American Medical Association found that patients who were deficient in vitamin D were 80 percent more likely to test positive for the virus than those who were not.

"Vitamin D is important to the function of the immune system and vitamin D supplements have previously been shown to lower the risk of viral respiratory tract infections," study author David O. Meltzer, MD, a professor of medicine at the University of Chicago, said in a statement. "Our statistical analysis suggests this may be true for the COVID-19 infection." And for more on which dietary supplements you should be sure to get, check out Lacking This Vitamin Is Putting You at Severe COVID Risk, Study Says.

2
Dining out at a restaurant

Being able to go out for a meal at your favorite restaurant has become much more difficult in the months since the pandemic started. But according to a report published by the U.S. Centers for Disease Control and Prevention (CDC) on Sept. 1o based on the results of a survey of coronavirus patients, it may be safer to hold off on your craving for your favorite dish.ae0fcc31ae342fd3a1346ebb1f342fcb

The findings revealed that those who tested positive for COVID were twice as likely to have eaten out two weeks before symptom onset as those who tested negative, including at restaurants with outdoor and patio dining. And for more on how eating out can create potential safety issues, check out The No. 1 Worst Mask Mistake You're Probably Still Making.

3
Going into the office

The beginning of the pandemic also marked the start of a completely new work style for millions across the country as teleworking became the norm. But as some areas have loosened health guidelines and some companies have begun welcoming workers back to their old desks, researchers have found that it may prove to be a risky move.

According to a report from the CDC released on Nov. 5, going into the office doubles your chances of catching COVID. The research found that people who worked full- or part-time off-site via teleworking were almost half as likely to test positive for the virus than those who reported going into an office or school setting over the course of the workweek. And if you want regular updates on COVID and more, sign up for the daily newsletter. 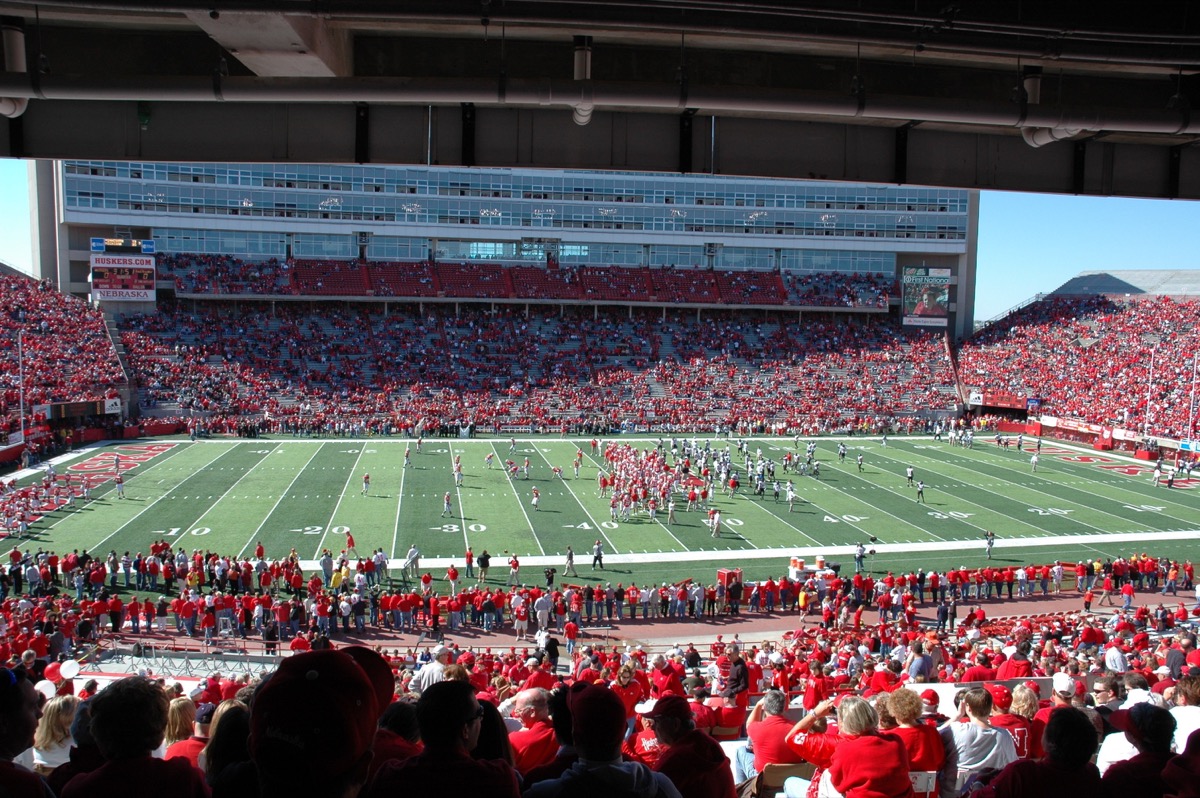 To any big sports or music fan, there's nothing like the rush of cheering on your favorite team or performer and feeling the energy of the crowd in a packed arena or stadium. Unfortunately, the pandemic has made the risk of filling up large venues too high. A study conducted by scientists in the U.K. and published in the journal Covid Economics found that cities that hosted soccer matches saw a spike in cases in their wakes, and even having stadiums 80 percent empty didn't make them any safer.

"Even when stadiums are only partially filled, fans tend to pack together in groups," James Reade, PhD, a sports economist at the University of Reading and lead author of the study, said in a statement. "They also mix in bar areas, toilets, and queues, as well as in pubs, shops, and restaurants outside the grounds. They travel long distances around the country to attend matches, often in groups and on public transport. This behavior presents an effective route for airborne viruses to spread, and is no less prevalent with smaller crowds." And for more risks you're taking on, read up on The 4 Places You're Most Likely to Catch COVID During the Current Wave.

Best Life is constantly monitoring the latest news as it relates to COVID-19 in order to keep you healthy, safe, and informed. Here are the answers to your most burning questions, the ways you can stay safe and healthy, the facts you need to know, the risks you should avoid, the myths you need to ignore,and the symptoms to be aware of. Click here for all of our COVID-19 coverage, and sign up for our newsletter to stay up to date.
Zachary Mack
Zach is a freelance writer specializing in beer, wine, food, spirits, and travel. He is based in Manhattan. Read more
Filed Under
Coronavirus • News • Pets • Safety
Read This Next
Latest News
Read This Next