15 Diet Fads That Are Downright Dangerous

When you want to slim down, just stick to the classics.

Every few months, there seems to be a new diet craze that comes out of the woodworks. The problem with these fad diets? They're restrictive, not always backed by science, and can in fact be downright dangerous. We get the appeal, though; eating fruit, veggies, and drinking plenty of water to lose weight isn't the most exciting thing in the world, so it makes sense that people seek more thrilling options.

But for serious (and seriously healthy) weight loss, your best bet is stick to the simple, proven methods—and avoid these dangerous diets at all costs. And for tips on how to shed pounds healthily, bone up on the 20 Science-Backed Ways to Motivate Yourself to Lose Weight. 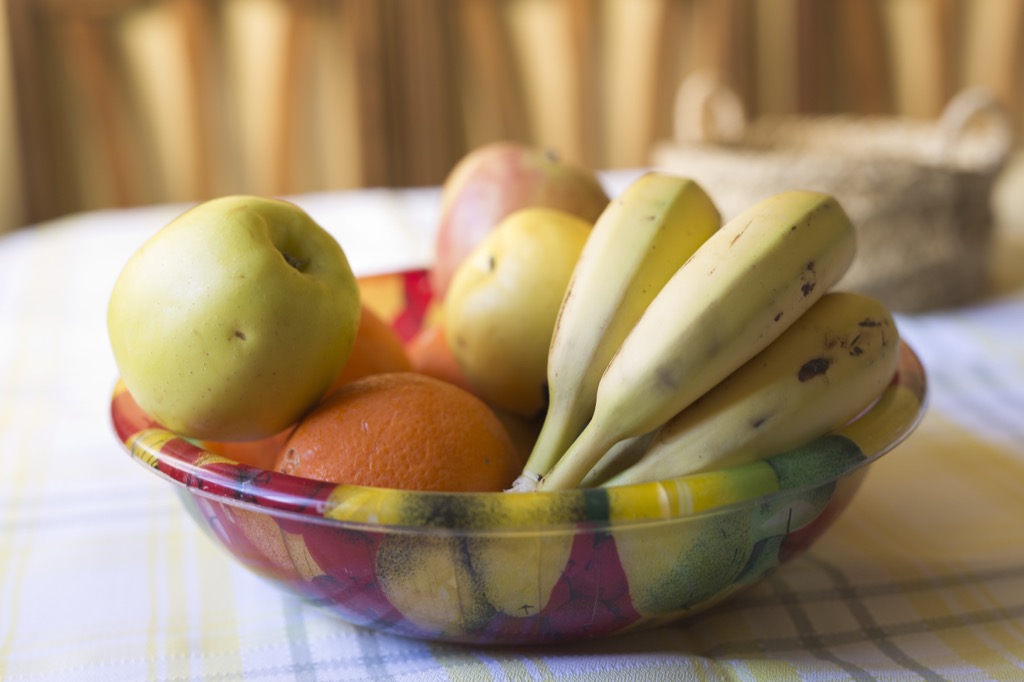 Don't worry—the werewolf diet doesn't have you hunting prey and howling at the moon. What is does have you do is almost as crazy, though: ingesting only water and fruit and veggie juice for 24 hours during the full moon or new moon. Not only are you missing out on chewing on real food, but you're also setting yourself up for failure: experts say there's no research to back it up and you'll regain any weight you lose.

Can you imagine only eating 10 bites of food a day? Experts say it's an eating disorder waiting to happen and isn't even a little bit healthy. Surprisingly, it was created by an actual medical professional—Dr. Alwin Lewis, of Burbank, California—and involves skipping breakfast, then eating only 5 bites of food for lunch and 5 bites for dinner.

Yes, you can eat anything you want, but it's still so low-calorie that this—and other crash diets—can really mess up your body, causing everything from heart palpitations to a decrease in your immune function. For more ways to stick to your current healthy regimen, check out these 30 Best Ways to Stick to Any Diet. The Military Diet—also called the Hot Dog Diet—involves eating things like hot dogs and tuna to lose weight. There are claims that it boosts your metabolism and can make you lose 10 pounds in a week, but according to experts, that's all false. You might lose some water weight, but the low-calorie count can put your body straight into starvation-mode, which actually slows down your metabolism—not speeds it up. And because your body thinks you're starving, you'll actually end up packing on more pounds after your "diet" is over. To actually get the most out of your body's fat-burning furnace, check out the 30 Ways to Boost Your Metabolism After 30. 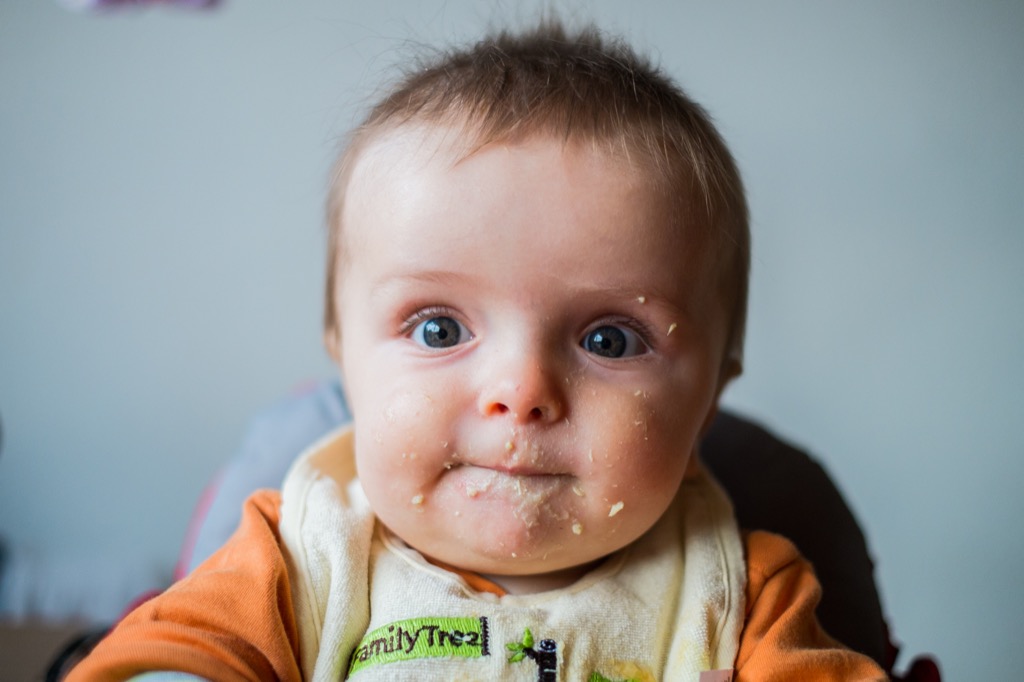 If you had to guess, what age group is baby food made for: babies or adults? If you guessed babies, you're right, obviously—but you might be surprised to learn there's an actual diet plan where grown-ups are getting their calories from Gerber jars. Fitness guru Tracy Anderson reportedly first made the Baby Food Diet a thing, and it sounds all sorts of gross: Instead of eating real, wholesome food, you replace breakfast and lunch with 14 jars of baby food (pureed peas, included!) that are incredibly low in calories and won't give your body everything it needs to stay healthy. For more diet myth busting, check out these 20 Worst Food Myths That Still Persist. 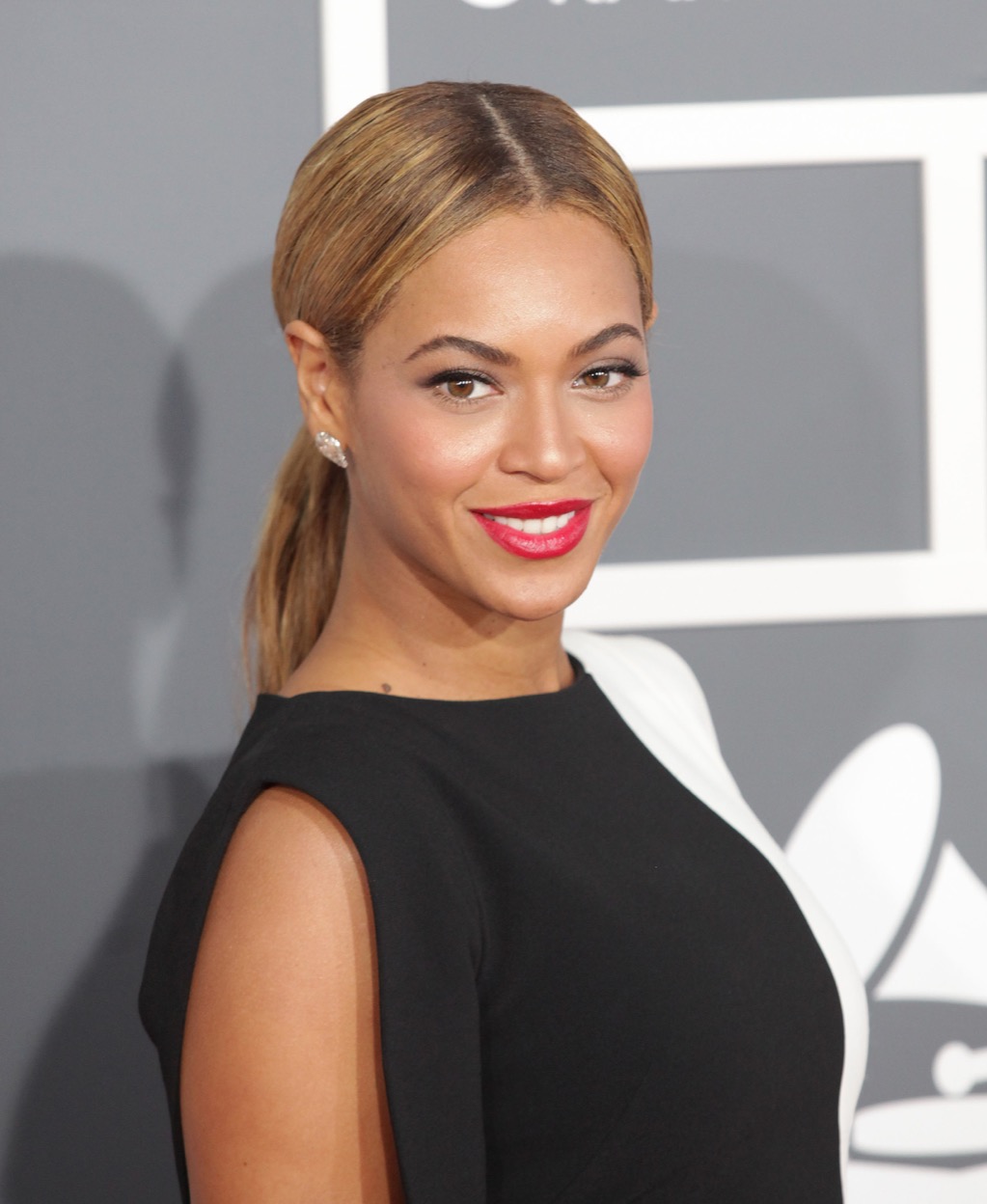 Thanks to Beyoncé, the Master Cleanse took off in 2006 when she used it to drop weight for the movie Dream Girls. Basically, it involves drinking a mix of lemon juice, maple syrup, cayenne pepper, and water 6 to 12 times a day. With the lack of calories, of course, you'll lose weight—but at the cost of putting your body in harm's way. And even worse, once you stop, all the weight you lost will come right back. 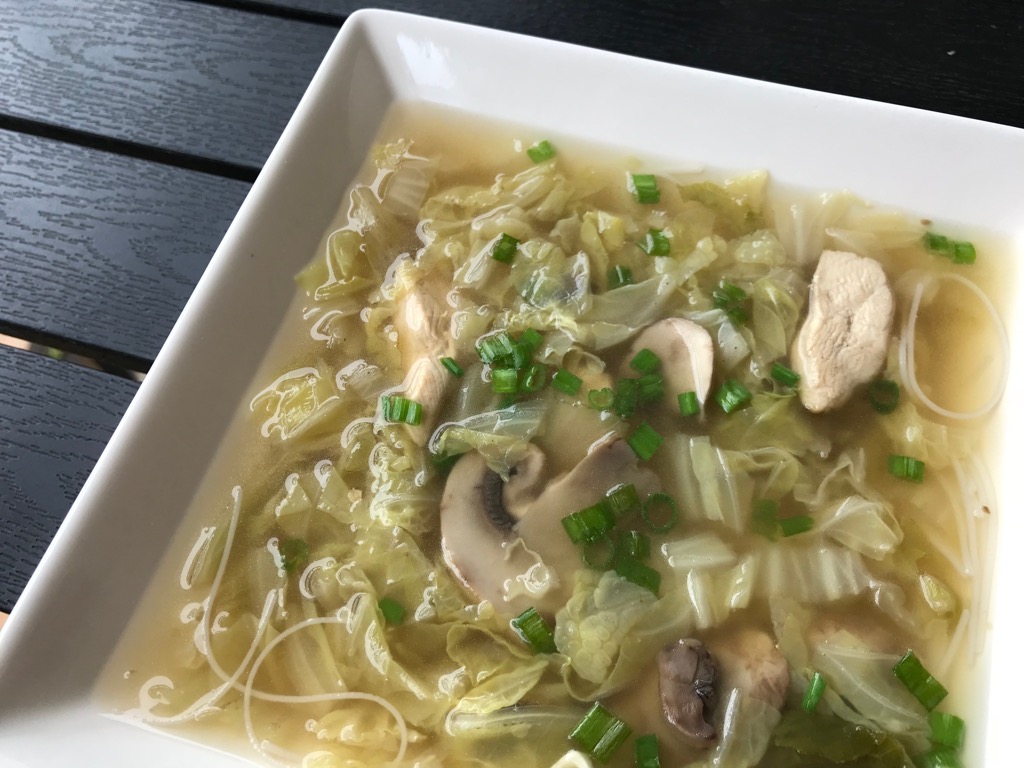 Eating soup can be a hearty, nutritious way to lose weight when you make something that's full of wholesome ingredients. The Cabbage Soup Diet, on the other hand—which just involves eating as much cabbage soup as you want throughout the day—is not. What's more, the American Heart Association says it's a bad idea due to all the negative side effects, like abdominal pain and exhaustion.

Like cabbage, grapefruit is great in moderation: it's full of vitamin A, vitamin C, and potassium. When you surround your entire diet around one food, though, that's when things get messy. This fad diet, wherein you eat nothing more than grapefruit for 10 to 12 days, first became a thing in the 1930s, and it's somehow still making the rounds. Eat grapefruit with your meals if you want to, but eating only the fruit can lead to serious health problems down the line, says the Cleveland Clinic—particularly because you're not getting everything your body needs to function properly, like, you know, protein. For more failed weight loss tactics, check out these 40 Weight Loss "Secrets" That Don't Work.ae0fcc31ae342fd3a1346ebb1f342fcb 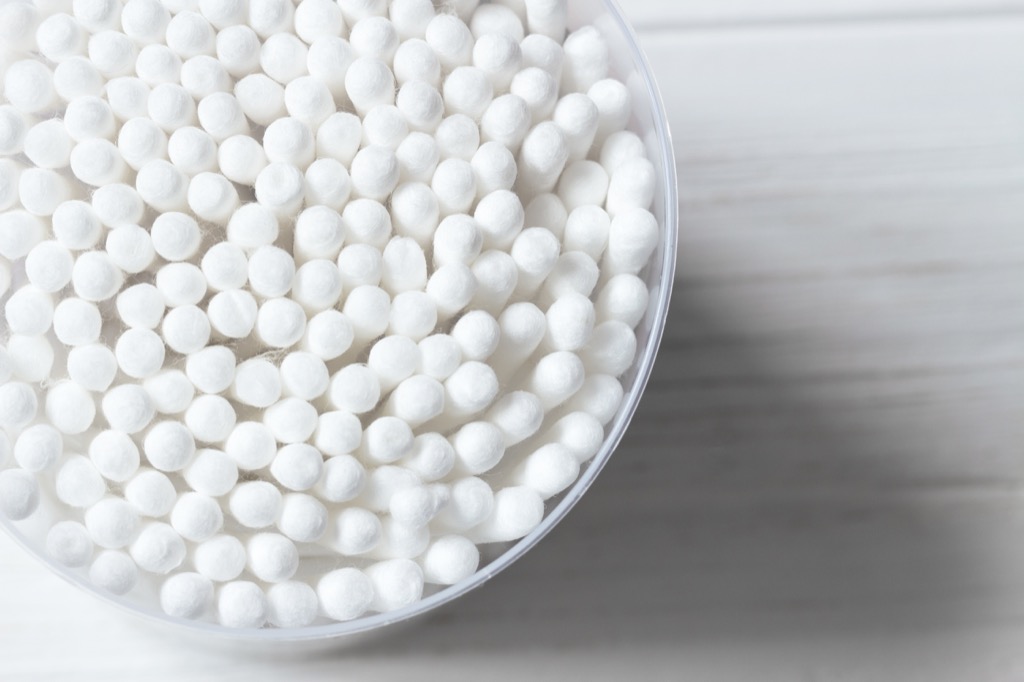 This diet has "dangerous" written all over it, but people still continue to think it's safe and effective. Here's how it goes: instead of eating, you chow down five cotton balls dipped in orange juice, lemonade, or a smoothie as a meal to make you feel full. Not only are those cotton balls filled with dangerous chemicals, but experts also say eating them could severely obstruct your intestinal tract—something that can be life-threatening. Use them in the bathroom and keep them far, far away from your dinner plate. 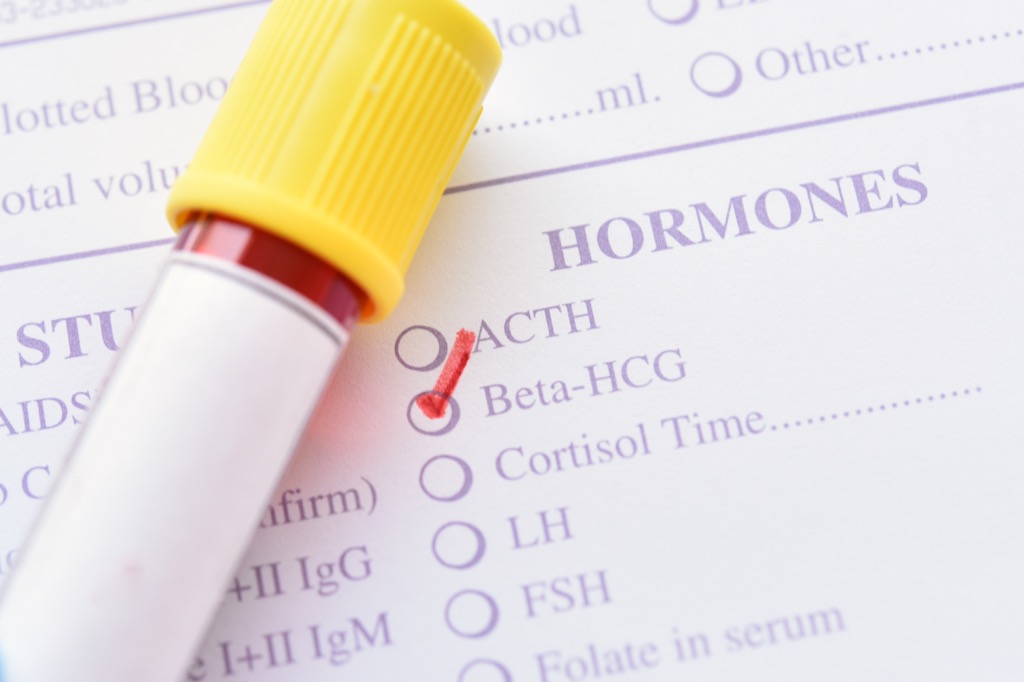 If you desperately want gallstones, an irregular heartbeat, depression, and fatigue, try the HCG Diet. According to the Mayo Clinic, it involves severely restricting your calories and using HCG—a hormone produced during pregnancy—to make you lose weight. Not only does the Food and Drug Administration recommend avoiding using HCG for weight-loss at all costs, you should also know that this method simply doesn't work. All it does it put your body at risk for health issues in the future. 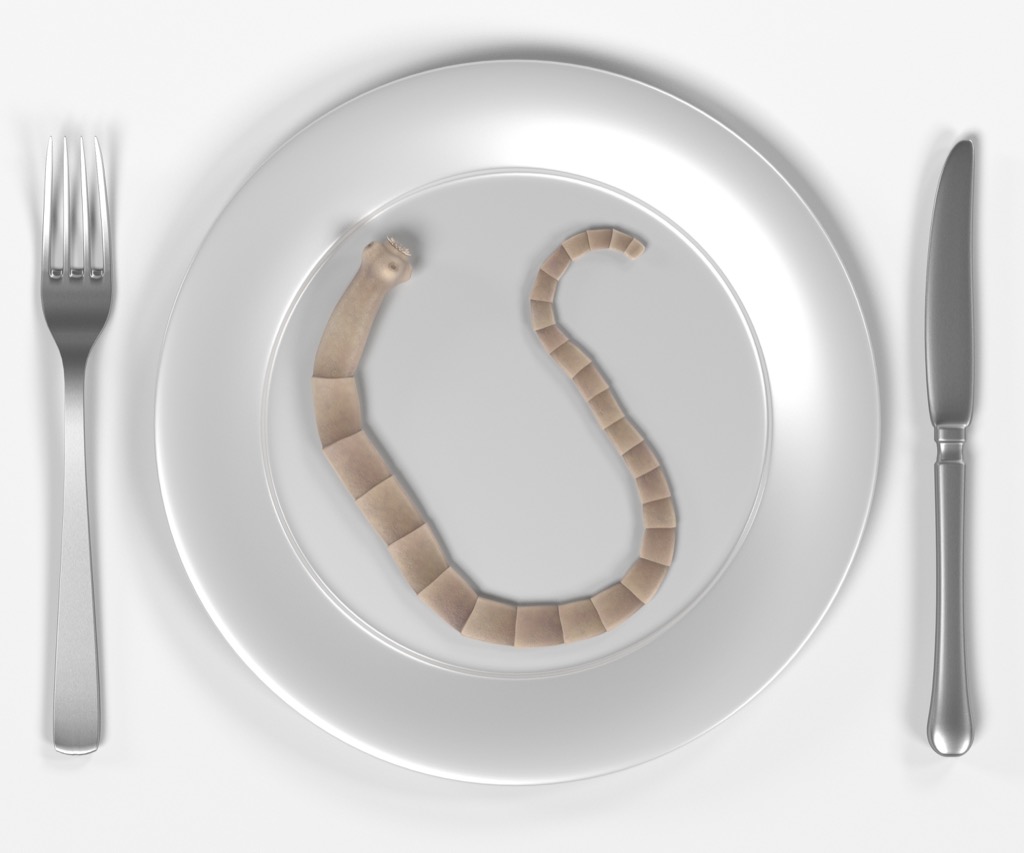 Some people are so desperate to lose weight that they're willing to swallow an actual tapeworm to get the job done. Yes, really. Of course you'll lose weight: you voluntarily gave your body a parasitic infection that's eating food right out of your intestines. But it's super dangerous, and according to experts, it can leave you with horrible side effects—and the potential for death.

Juice cleanses are super trendy and will probably always be super trendy: every Instagram star swears by them as a healthy way to lose weight. The reality, though, is that drinking all your calories does a lot more harm than good: experts say cleanses aren't a long-term solution to weight loss. Once you eat normal food again, you'll gain the weight back—and while you're sipping juices, you put yourself at risk of nutritional deficiencies. Also, because they're low in protein, the weight you do lose isn't fat—it's muscle. (So: the polar opposite of what you want.) To clear up any dieting confusion, check out the Difference Between a "Cleanse" and a "Detox."

One of the worst things you can do for your health is to turn yourself into Sleeping Beauty to lose weight. The Sleeping Beauty diet involves taking a sedative to sleep around 10 hours a day—because when you're sleeping, you're not eating. Not only is it an incredibly disordered way to lose weight, but experts also say it's downright dangerous. You should never depend on drugs to help you sleep away your life, all to avoid extra calories. To actually sleep healthily, learn the 70 Science-Backed Tips for Your Best Sleep Ever.

Knowing your blood type is important for an instance where you might need or are donating blood. Basing your diet around it, though, is a horrible idea. The Blood Type Diet—which comes from naturopathic doctor Peter J. D'Adamo's book—involves eating certain things based on whether you're Type O, A, B, or AB. The funny thing is that, despite sounding good, there's no real scientific evidence to back this diet up, and, according to Harvard Medical School, it can ultimately be restrictive and inhibit foods that would actually do your body a lot of good.

As crazy as it seems, there's a diet out there that people are actually doing that involves only living off of water, sunlight, and tea for months. Not at all surprisingly, experts don't think the Breatharian Diet is a good idea: "Anyone advocating that we can live largely without food or fluids is giving dangerous advice. Living on air and sunshine will provide no caloric or fluid intake. Anyone who claims to be maintaining a steady body weight on such a diet is unlikely to be telling the truth," says David Oliver, PhD.

Why chew your food normally when you can chew everything a minimum of 100 times before swallowing? It sounds absolutely horrible (hello, jaw cramps!), but that's exactly what the Flecherizing Diet—which was created over 200 years ago—consists of. The only thing "Fletcherizing" is going to do is take up all your free time and make your jaw hurt really bad—especially since "chewing" liquids is somehow part of the plan, too. Chew your food slowly—which really can help you lose weight!—but do so in moderation. Chewing your food 15 times is much better than anything in the triple digits. For more weight-loss motivation, check out these 50 Genius Weight-Loss Motivation Tricks.