These stars have bonds that stayed strong, even through heartbreak.

Buzzy Hollywood relationships often lead to front-page breakups. Just this year, long-term couples like Olivia Wilde and Jason Sudeikis and Kelly Clarkson and Brandon Blackstock announced that they've called it quits. And while some splits can result in public mudslinging, contentious divorce proceedings, or just steering clear of each other forever, other celeb couples manage to stay close—not as lovers, but as friends. Whether they're still raising kids together or just have bonds stronger than steel, there are tons of A-listers who've ended their romantic relationships only to become BFFs. So keep reading for celebrity exes who are best friends now, and for a glimpse at celeb duos in their early stages, check out 18 Photos of Celebrity Couples When They First Got Together.

Comedian Jenny Slate and Marvel superhero Chris Evans hit it off when they played love interests in the 2017 movie Gifted. (That's them with costar Mckenna Grace above.) In fact, they first met during a "chemistry read" for the film—i.e. the part of the audition process where the creative team makes sure that two actors have a spark that'll show onscreen. The chemistry was, in fact, there, leading the two to start a relationship IRL. But distance and busy schedules took their toll, breaking the two up not long after the movie that launched their romance premiered.

"I don't mind talking about him at all. He's a lovely person," Slate told Vulture of Evans, post-breakup. As for Evans, he told USA Today, "I am endlessly grateful for having met her. She will be in my life always."

In fact, the breakup was so amicable, the two got back together briefly. It seems that the chapter is now closed since Slate is engaged to someone else, but hopefully this friendship will last.

For famous pairs who don't care about tying the knot, check out 16 Celebrity Couples You Didn't Realize Aren't Married.

Another on-set fairytale, Channing Tatum and Jenna Dewan famously fell in love while making Step Up back in 2006. They married in 2009 and welcomed their daughter in 2013. Their 2018 separation announcement certainly broke a lot of hearts, but the couple stressed in their statement that there was no bad blood between them.

"Absolutely nothing has changed about how much we love one another, but love is a beautiful adventure that is taking us on different paths for now," they wrote on social media. "There are no secrets nor salacious events at the root of our decision—just two best-friends realizing it's time to take some space and help each other live the most joyous, fulfilled lives as possible."

Though they got divorced in 1993, Lisa Bonet and Lenny Kravitz have maintained a strong bond over the years in raising their daughter, Zoë Kravitz, together. In fact, Lenny even shares matching rings with Bonet's current husband, actor Jason Momoa, who gifted them as a gesture of friendship.

For the splits we aren't over, check out 15 Celebrity Couple Breakups You're Probably Still Mourning.

Before "Brangelina," there was Brad Pitt and Jennifer Aniston. And while the couple split up 15 years ago—and have both been married to other people since—they've managed to still remain friends. And they've probably accepted that every time they interact, they'll set tongues wagging about a possible reconciliation. Within the last year, they scored headlines by catching up backstage at the SAG Awards and acting together (with still-crackling chemistry) in a virtual table read of the movie Fast Times at Ridgemont High.

Model Heidi Klum and musician Seal were married for a decade, from 2002 to 2012, and have three kids together. And despite the divorce, it appears the couple is still friendly with one another. Klum even invited her ex-husband to guest judge on her show, America's Got Talent, in 2017—and they were chummier than ever during his appearance.

For more celeb couple nostalgia sent right to your inbox, sign up for our daily newsletter.

No doubt their fans wanted The Amazing Spider-Man costars Andrew Garfield and Emma Stone to end up together. But they'll have to settle for the two being buddy-buddy exes. As A-Listers, they're often at the same events, so their mutual support is on display. (See: Garfield's reaction any time Stone has won an award.) In 2017, Garfield opened up about their post-split relationship on Vanity Fair's Little Gold Men podcast.

"We care about each other so much, and that's a given, that's kind of this unconditional thing," he explained. "There's so much love between us and so much respect…I'm her biggest fan as an artist. So for me, it's been bliss to be able to watch her success and watch her bloom into the actress that she is. And it's also been wonderful to have that kind of support for each other. It's nothing but a beautiful thing."

Naomi Watts and Liev Schreiber's romance lasted for 11 years, but their friendship is still going. The former couple, who co-parent their two children, have even been spotted on a friendly jog.

For pairs who kept their nuptials super-private, check out Celebrity Couples Who Had Top-Secret Weddings.

Drew Barrymore is known for being one of the friendliest people in Hollywood, so it's no surprise that she's the type to keep things positive with her exes. She and Justin Long were a couple on and off-screen, but permanently went their separate ways in 2010. They've been known to hang out since, however, and have also praised each other publicly. Earlier this year, Barrymore commented on a Paper Instagram tribute to Long, saying, "Your [sic] not wrong! He's great." Long's playful response? "ah what do YOU know?!"

After being paired up on the The Vampire Diaries in 2009, costars Ian Somerhalder and Nina Dobrev fell for each other off-screen, too. Since then, Somerhalder has gone on to marry actress Nikki Reed—but Dobrev appears to still be friends with Somerhalder, and with Reed, as well. When asked if she saw the friendship as "weird" on an episode of Watch What Happens Live With Andy Cohen, Dobrev replied, "I don't think it's weird at all. I think that's great. Why can't everyone be friends?"

For famous couples who've gone the distance, check out The Longest-Lasting Marriages in Hollywood.

After a decade-long marriage, Gwyneth Paltrow and Chris Martin had a well-publicized "conscious uncoupling" in 2014. But the two have remained tight—especially when it comes to co-parenting their two children. Paltrow even invited Martin and their kids to go away with her and new husband Brad Falchuk in what she referred to as a "very modern honeymoon."

Jennifer Lopez has made waves with her recent engagement to former New York Yankees third baseman, Alex Rodriguez. But, before that, the star was head-over-heels for Marc Anthony; the two were married from 2004 to 2011. And while the romance may be gone, it appears there's no bad blood. Lopez even referred to Anthony as her "best friend" during a 2017 appearance on Live with Kelly.

Sarah Silverman and Jimmy Kimmel have been broken up for over a decade, but they're still so close that Kimmel even helped honor his ex by speaking at the 2018 unveiling of her star on the Hollywood Walk of Fame. But, he revealed in an appearance on Watch What Happens Live, the friendship had to develop on its own.ae0fcc31ae342fd3a1346ebb1f342fcb

Both comedians definitely have a sense of humor about their history, which is on display whenever Silverman drops by Kimmel's late-night chat show.

For more evidence that Silverman is really chill about these things, see her friendship with Michael Sheen's ex, Kate Beckinsale. Sheen and Beckinsale were an item from 1995 to 2002, and they have a daughter together. They've also stayed tight since their split, occasionally posting cozy photos of their family hangs.

Sheen and Silverman then dated for four years, during which she and Beckinsale also hit it off as friends. Beckinsale even sent Silverman personalized M&Ms emblazoned with her and Sheen's faces as a Christmas gift in 2018. Sadly, that was around the time Sheen and Silverman split, but the thought still counts.

Following the couple's separation in 2010, Courteney Cox and David Arquette still remain pals, with Cox calling Arquette her "best friend in the world" in a 2013 interview with Ellen DeGeneres. "I love him," she told the host. "I appreciate David more now than I ever did. I mean, it's hard. I don't recommend divorce in general, but, you know, he is my best friend and we've both grown and changed." 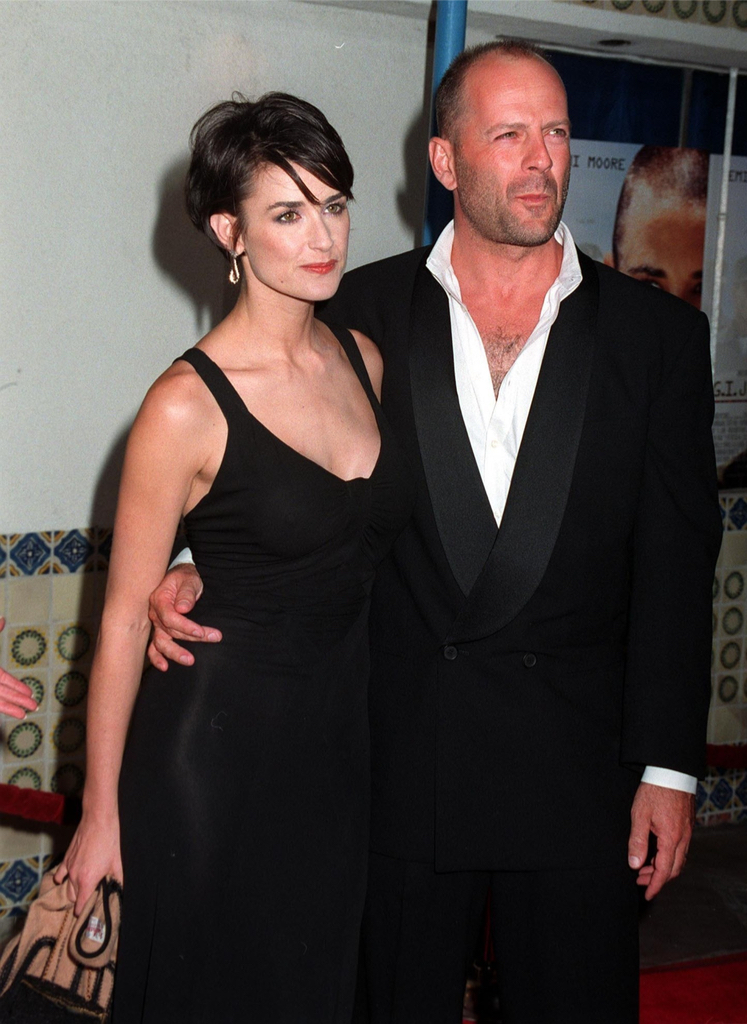 With three kids together, Demi Moore and Bruce Willis remain thick as thieves, even though they split back in 1998. Moore was even invited to share in a friendly ribbing of her former husband during the Comedy Central Roast of Bruce Willis, in 2018. (For his part, Willis seemed a good sport.)

Mindy Kaling and B.J. Novak share such a close friendship that many people might not know they ever dated in the first place. As their characters' romance played on The Office, the pair shared an on-again-off-again relationship IRL, as well. And even though they're not together now, Novak is godfather to both of Kaling's children. She told Good Housekeeping in 2019 that she considers him a "member of the family."

The Cruel Intentions costars announced their separation back in 2006, but the split didn't bring along the end of their friendship. Reese Witherspoon and Ryan Phillippe co-parent their two children—Deacon and Ava—to this day. And, when asked about their relationship during a 2015 interview with Larry King interview, Phillippe revealed that the pair were still very close friends.

Fans were heartbroken when Demi Lovato and Wilmer Valderrama split in 2016, but at least they can take comfort in their enduring friendship. Valderrama appeared in Lovato's 2017 documentary, Simply Complicated, in which Lovato stated that the pair hadn't fallen out of love, they had just decided they were "probably better as friends." Valderrama also supported Lovato, who's dealt with substance use disorder, through her relapse.

It's been some time since Cameron Diaz and Justin Timberlake were together, and while they split up in 2007, they still appear to be friends—despite both moving on to happy marriages. (Diaz is currently married to musician Benji Madden, while Timberlake tied the knot with Jessica Biel back in 2012.) The pair even starred opposite each other as romantic leads in the 2011 rom-com, Bad Teacher.

Nick Cannon and Mariah Carey ended their six-year marriage in 2014, but with two kids together, it seems the pair still has love for one another. In 2018, they even celebrated Christmas together as a family in Colorado. Both Cannon and Carey shared separate Instagram posts of the revelries.

After a decade of marriage, Ben Affleck and Jennifer Garner announced their split in 2015. The pair have remained close friends since, though, as they co-parent their three children. Affleck even posted a heartfelt message on Instagram for his ex-wife on Mother's Day 2019, writing that Garner helped show him "the meaning of love."

Former Disney star Hilary Duff married hockey professional Mike Comrie back in 2010. But after just four years, the couple called it quits. However, Us Weekly reports that Comrie is still very close with Duff's family, especially as they continue to raise their son, Luca. Duff and Comrie were even spotted getting coffee together post-divorce in 2017.

23
Will Smith and Sheree Fletcher

It's impossible to deny the love of Will Smith and Jada Pinkett Smith. But before that marriage, Smith was married to actress Sheree Fletcher. Though Smith and Fletcher divorced in 1995, following three years of marriage, the pair still remain friends to this day. These days, even Fletcher and Pinkett Smith are friends: Fletcher was the first guest on Pinkett Smith's Facebook show, Red Table Talk.

Following eight years of marriage, Chris Pratt and Anna Faris announced their divorce in 2017. However, the exes still appear to be friends, and Faris even revealed that Pratt called her before proposing to his now-wife, Katherine Schwarzenegger.