The Single Best Way to Boost Your Metabolism Every Day

Keeping your fuel furnace firing is easier than you ever imagined.

For a moment I'd like you to imagine a spider. For the record: not the fluorescent red-and-blue, artificially enhanced arachnid that bit Peter Parker's hand and endowed him with the gifts of web-slinging super powers in the Spider-Man films. No, just your average, everyday, eight-legged predator that you'll find crawling about the garden in your backyard. These are the spiders that spin the beautifully ornate webs that you see portrayed in gauze above household doorways on Halloween. These spiders are largely harmless but no doubt freak out your grandmother—if not you.

When many types of spiders hunt for prey, they opt for a "sit- and-wait" strategy in which they spin their webs and then they let their food come to them. While waiting they sit there motionless, sometimes for very long periods of time. Yes, it's creepy, but they do it for several reasons. For one, spinning a giant web takes an enormous amount of energy, so they need to conserve what energy they have left. The second is that pouncing on a predator takes a ton of energy, too. And these arachnids, since they need conserve what energy exists in their little bodies, have abnormally slow resting metabolic rates to keep them alive. That state of motionlessness, when they're not burning up energy and their bodies essentially shut down, is what scientists have termed the super relaxed state (SRX).

And get this: there's increasing evidence that we may do it, too.

In a study published in 2016 in the journal PLOSone, researchers led by Roger Cooke, Ph.D., of the University of California in San Francisco, looked closely at the behavior of myosin, a motor protein in cells that is crucial to muscle function and metabolism in frogs and other animals, including humans. The researchers discovered that in different species—such as spiders—myosin essentially shuts off when the muscles are inactive during the super relaxed state. In other words: when your muscles aren't moving at all—for even short periods—your metabolism is likely taking a breather.

"The large amount of myosin in animals and humans leads to the conclusion," the authors write, "that the equilibrium between the SRX and the DRX [or disordered relaxed state, when mysosin laments act differently and cells are burning energy] will play a role in whole body metabolism."

Now, this doesn't necessarily mean the solution is living your life on a hamster wheel in constant forward movement. But this ground-breaking research has shined a light on something wildly overlooked in today's day and age: the simple importance of just moving around.

Not hitting up Flywheel for a 45-minute spin class. Not running a marathon. And definitely not training to be a Navy SEAL.

No, I'm talking about simply swinging your arms while you lie on the couch. "Moving throughout the day [is important]," says Clyde Wilson, Ph.D., an instructor at Stanford University, a research associate at the University of California, San Francisco, and director of the Center for Nutrition at the Sports Medicine Institute—who also happens to be one of the world's foremost experts on the science of metabolism. "Because a simple twitch from your nervous system to muscle is what gets you out of the super relaxed state."

The most cutting-edge science on the subject says that stretching, using your jaw muscles to chewing gum, fidgeting, standing up when you're sitting down, and even using your muscles again to sit down after you've been standing still for a while—will indeed help keep your body burning energy. (That's right: sitting down actually boosts your metabolism!)

With that in mind, here are three excellent ways to give your body an added metabolic boost every single day, courtesy of my new book, The Super Metabolism Diet: The Two-Week Plan to Ignite Your Fat-Burning Furnace and Stay Lean for Life. (And for more ways to harness the full power of your body's fuel-burning apparatus, pick up your copy today!)

1
Move More Than a Spider 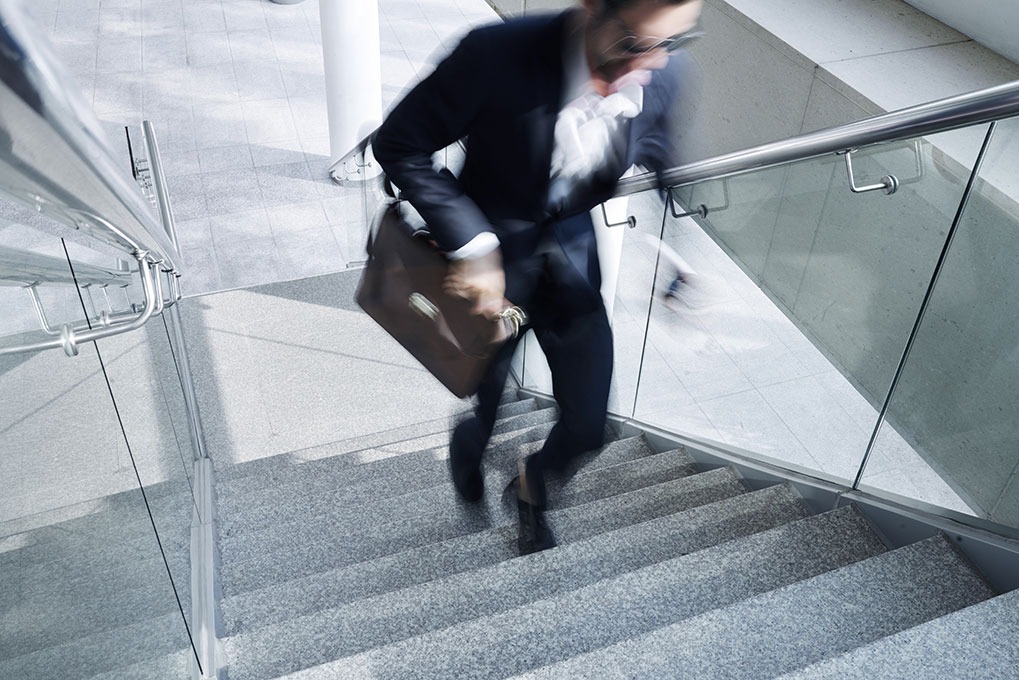 According to fitness buff Tim Blake, owner and founder of superdads.com, the single biggest thing you can do to get your metabolism ring is to increase your basic movement, or your Non-Exercise Activity Thermogenesis (NEAT). "Basically, that means adding movement to everything you do, whenever and wherever possible," he explains.

This includes simple things like adding fidgeting hands and feet to five hours of desk work. "That racks up an additional caloric expenditure equivalent to running 1.5 miles! Fundamentally, this should be your mantra: Never walk when you can run, never stand when you can walk, never sit when you can stand, never lie down when you can sit."

Simply taking the stairs is the great metabolism-booster, suggests Shari Portnoy of foodlabelnutrition.com. "Even when you're on the escalator, move! People ask why I am skinny and it's because I don't sit still. Anytime you can, just move, take the stairs, walk somewhere, and avoid elevators unless you're carrying a lot."

If you're really feeling ambitious about it and are alone, do some squats while you're on that elevator! And for more on your body's fuel-burning apparatus, check out the 30 Best Ways to Boost Your Metabolism After 30. 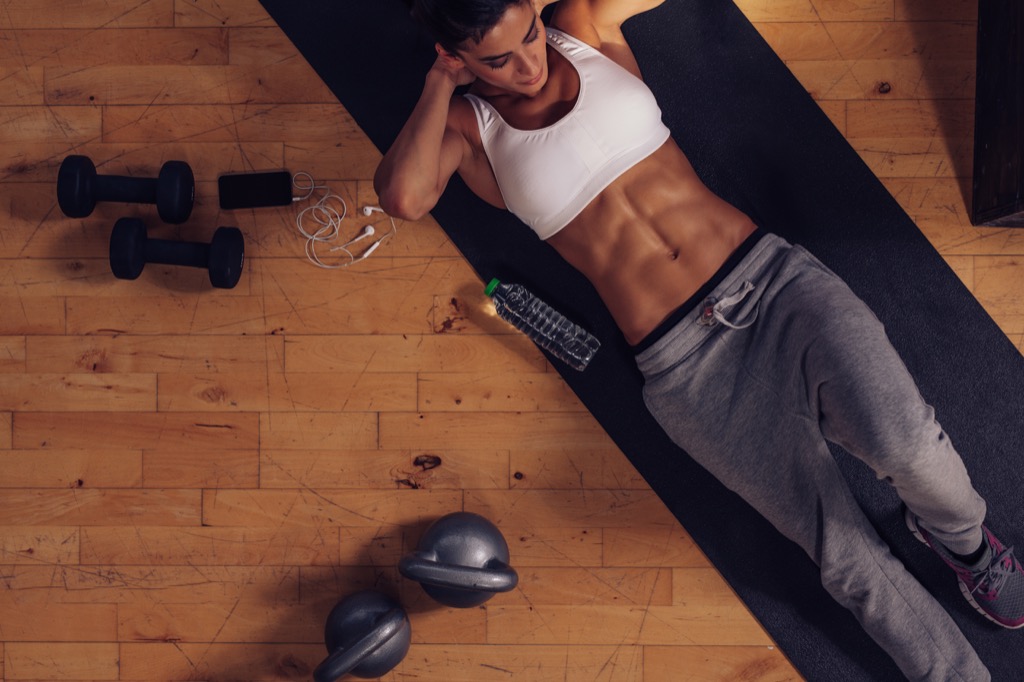 If you're determined to burn more energy and therefore burn more fat, you can grow your muscles, which burn a lot more energy than your fat does.

"Let me give you an example," says Stanford's Wilson. "If you're an engine and you've had years of stress and low sleep and you're sedentary, your engine [has shriveled to the] size of a lawn mower engine."

If you want to become a Ferrari, you need bigger muscles.

"Then you can double and triple the engine size," he says.

Here are six easy ways to build muscle mass without joining a gym: 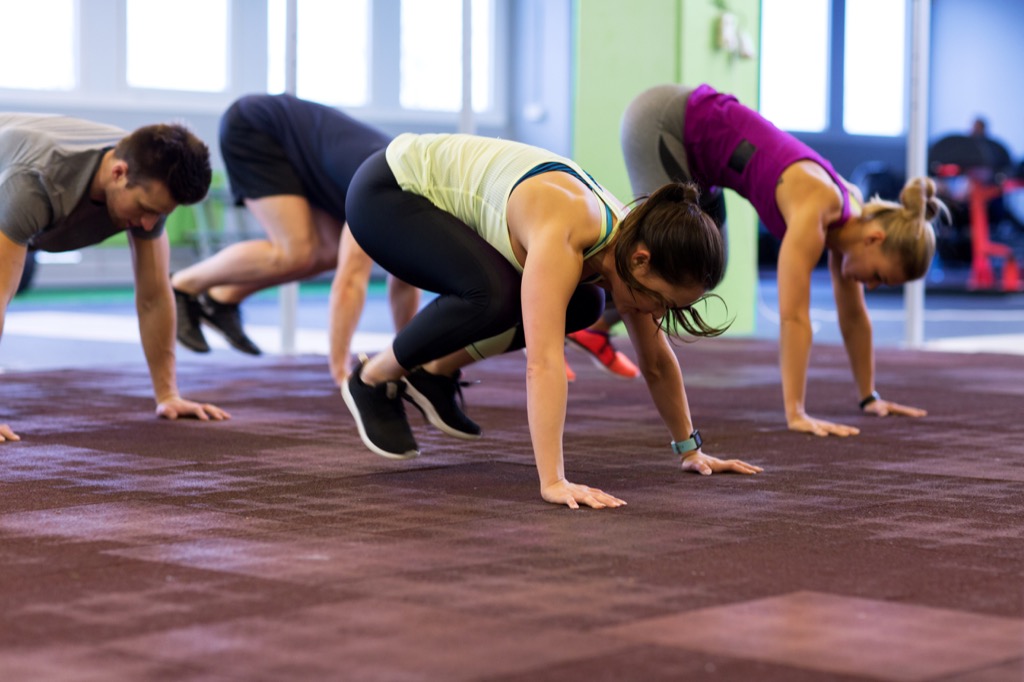 You've probably heard of the term "high-intensity interval training" (HIIT) before. At its most basic, it means doing short bursts of really intense exercise—like throwing ropes at the gym, doing all-out sprints (on foot or on a bike), performing Burpees or mountain climbers, trying the VersaClimber at your gym, or anything else that is really, really hard and you can only perform for a relatively short amount of time—and then then resting for a brief period of time (like, say, five or ten seconds) and then going at it again.

"This places a high metabolic demand on the body, burns lots of calories in a short amount of time, produces a high post-workout calorie burn, and helps to improve one's fitness level," explains Kathleen Trotter, personal trainer and author of Finding Your Fit. "Plus, intervals are a fantastic workout regardless of your fitness level; you adapt the interval intensity to t your current capacity."

Don't get me wrong: HIIT is hard. But studies are showing that it's probably the single most effective form of exercise you can be doing—and if you've built up your muscle mass, HIIT will unlock the full forces of your metabolism.

A study conducted by the Mayo Clinic and published in the journal Cell Metabolism last year found that HIIT exercise can actually slow down your body's aging process on a cellular level. Again, your muscles are the home to so many of your energy burning mitochondria. As you age and your metabolism slows down, your mitochondria slow down as well. But the researchers discovered evidence that right after super intense workout, mitochondria came back to life—in the HIIT group of participants in the study, mitochondrial function improved by 69 percent among older people, and by 49 percent among younger people.

"If people are looking to improve performance in the most time-effective way, and if they're looking to improve health in the most time effective way, then I think incorporating interval training is a very good strategy," says Martin Gibala, Ph.D., a professor of kinesiology at Canada's McMaster University—and widely regarding as one of the world's foremost experts on high-intensity exercise.

If that sounds like something you're interested in, here are some example moves you could be doing:

David Zinczenko
Dave is a globally recognized expert in health, fitness, nutrition, and weight loss and is the #1 New York Times bestselling author of 25 books in 15 languages. Read more
Filed Under
Diet • Healthy Eating • Nutrition • Wellness
Read This Next
Latest News
Read This Next