The Secret Workout Billionaires Are Doing

It's no secret that a lot of today's gyms are getting seriously luxurious. Thanks to sumptuous designs, on-site concierges, table-turning DJs, and lavish equipment that rivals the stuff you'll find in professional sports training facilities, you could say we're living in the golden age of spending gobs of money on getting really, really fit. And if you've ever wondered what cutting-edge stuff is going down in these places—what sort of futuristic exercise regimens that billionaires, CEOs, models, and celebrities of the world are doing that you're not—the reality may shock you.

When you're engaged in EMS, you wear a vest connected to a handful of electromagnetic cables through which a trainer sends electric "shockwaves" into your body—targeting individual muscles in the process—while you'll go through your routine. Put into perspective: a single bicep curl—or a squat, or a leg extension, or what have you—equals a single muscle contraction. Meanwhile, EMS supposedly enhances your workout so that your muscles experience up to 85 contractions per second for each muscle group. In other words: it adds a serious jolt to any exercise regimen.

Though this sort of muscle stimulation has been used for years on people recovering from injuries or undergoing physical therapy (if you have a broken leg, for instance, you can still work your quad muscles via electrodes and electric currents), EMS-paired-with-exercise isn't exactly doctor-approved.

"There's not a lot of great science behind it," Dr. Leesa Galatz, head of orthopedic surgery at Mount Sinai, told the New York Post. "Our concern is that if used incorrectly, at too high of an intensity or by overusing it, this could be dangerous. Some people can get breakdown of the muscle, which can be very harmful for the kidney." As such, medical professionals—and many EMS trainers themselves—recommend only doing EMS training three times a week, at most.

Per the Post, EMS is wildly popular abroad—particularly in Europe—but is a scant sight stateside. At the moment, there are only 13 places in the U.S. where you can find this particular training method. The most popular spot? New York City's upscale CORE: Club. 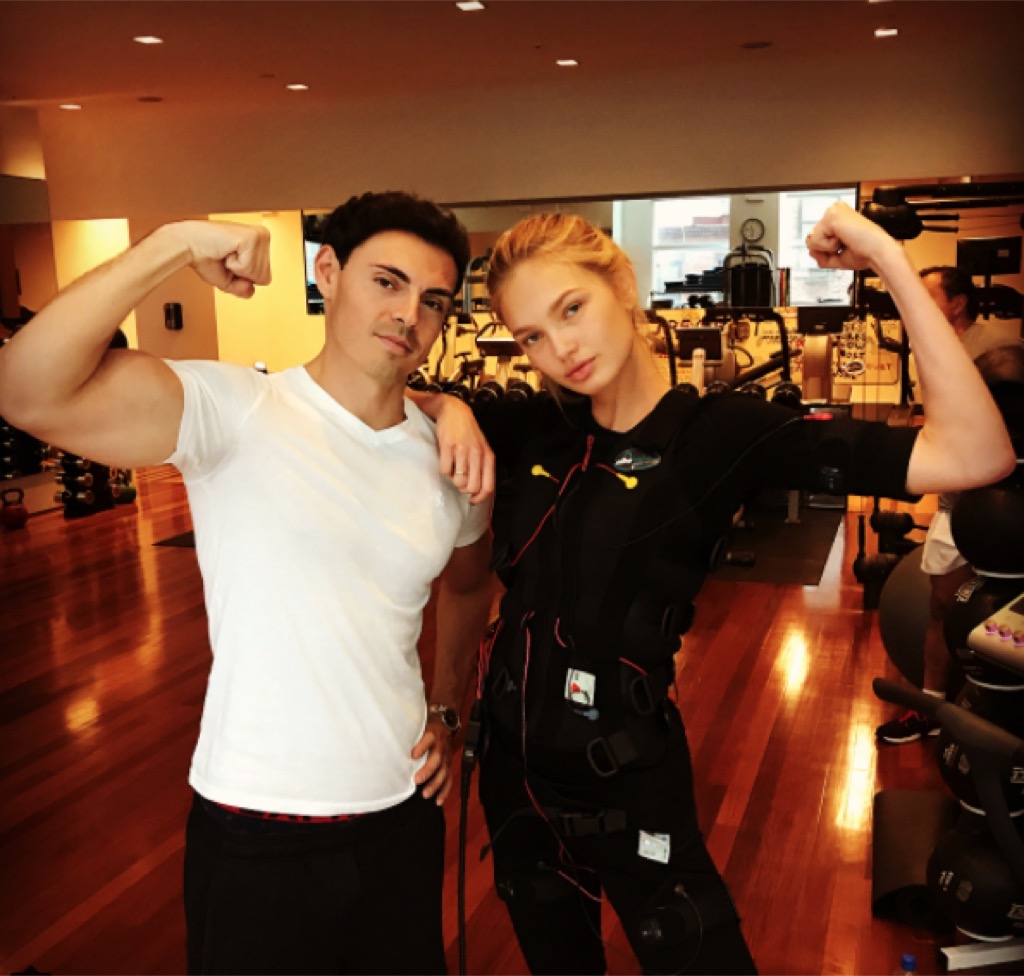 Elzomor and Strijd at CORE:.

At CORE:, the training is administered by Mohamed "Mo" Elzomor—and he's in high demand. Victoria's Secret models "want to train regularly," he tells the Post, "but I'm just booked. So I squeeze them in when I can," between sessions with the likes of Roger Goodell and Howard Schultz. (Elzomor also counts top models Alina Baikova, Alessandra Ambrosio, Hilary Rhoda, and Romee Strijd among his clientele.)

The reason all these rich and famous people go to Elzomor is because his method is a bit of a departure from traditional EMS training. Instead of simply hooking clients up to the vest and turning some dials, he combines the shockwaves with a traditional 20-minute high-intensity workout routine—planks, squats, leg lifts, and the like. That way, you can get a supercharged (literally) workout, and you only have to dedicate an hour each week to staying fit as a fiddle.

If that sounds like cheating, well, it kind of is: CORE: Club EMS sessions are $145 each for members. And that's after members spring for the $50,000 sign-up fee.
For more advice on living your best life, follow us on Facebook now!

Ari Notis
Ari is an editor specializing in news and lifestyle. Read more
Filed Under
Exercises • Fitness • Workouts
Read This Next
Latest News
Read This Next