33 Simple Health Tweaks That Will Add Years to Your Life

Some people prefer to live life on the edge with no concern for the consequences. But we're more of the mindset that it's possible to be here for a good time and a long time. Thanks to all the false information out there, most people believe that living a long and healthy life involves extreme dieting and prudence to the point of exhaustion, but it is very much possible to live to see your second century while also enjoying a french fry and family movie night. Herein, we've rounded up some simple health tweaks that will give you many more years to come.

People think that sunscreen only needs to be applied in the warmer months when the sun is out in full force, but it's actually important during every season. "Ultraviolet rays that are the cause of sun damage and skin cancer are always present," dermatologist Dr. Shilesh Iyer, M.D. explained to Forbes. 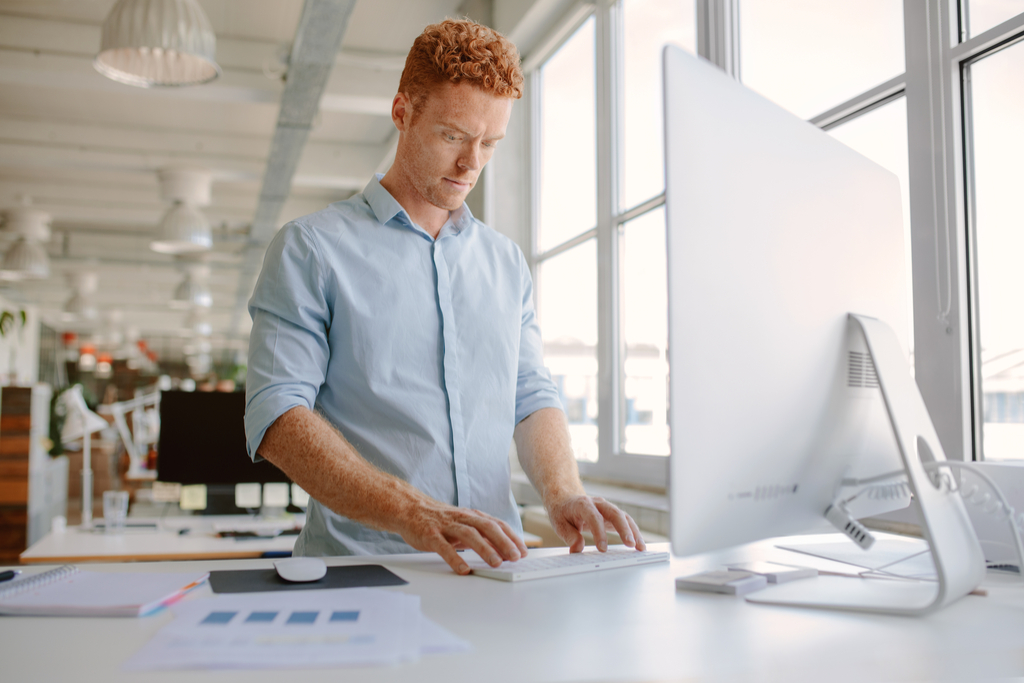 "Sitting really is the new smoking because living a sedentary lifestyle increases inflammation and inflammation is the root of most chronic disease," explains Walter Gaman, co-author of Stay Young: 10 Proven Steps to Ultimate Health. If you work in an office environment, things like investing in a standing desk ($339) and doing laps around the block during your lunch break could have a huge impact on your overall quality of life in the long run.

If you want to make the most of your time at the gym, then consider adding weight training to your routine. One study published in the journal Obesity found that, for overweight adults, weight training combined with dieting was most effective for fat loss and muscle retention. Sometimes your diet just doesn't provide you with all of the nutrients your body needs, and that's where supplements come in. Research has shown that adding a few vitamins and supplements into your routine could easily add years to your life—just make sure to first speak to your doctor about which ones are right for you.

The mind and body benefits of yoga are practically limitless. In fact, according to one study published in Frontiers in Human Neuroscience, practicing yoga and meditation every day can not only decrease anxiety levels, but also improve immunity and inflammation. Don't let the allure of Netflix keep you from reveling in a new read. Not only is reading fun, but one study published in the journal American Journal of Alzheimer's Disease & Other Dementias found that spending just an hour a day with a book can lower your risk of dementia down the road.

By waking up just an hour earlier, you allow yourself some extra time to work out, enjoy a nutritious breakfast, and soak up those early a.m. rays (which researchers have found can lower your BMI).

High blood pressure is a health risk—and an all-too-common one, at that—because it can lead to everything from kidney disease to heart failure. Luckily, there is a delicious way to bring your blood pressure down: by eating more watermelon. Researchers have found that the L-arginine and L-citrulline in the juicy fruit works well to reduce high blood pressure levels.

Most weight loss programs are overly complicated and restrictive, and so it's a relief that researchers at Tel Aviv University recently discovered that it's not what you eat that matters so much as when you eat it. Based on their findings, people who eat large, high-energy breakfasts followed by regular-sized lunches and small dinners lose more weight on average than dieters who eat six small meals throughout the day. By making this tiny tweak in your regimen, you can shed pounds and add years to your life.

Lending a helping hand is the ultimate win-win scenario. Not only are you doing something good to better the world around you, but research has shown that the selfless act actually adds to your lifespan as well.

Add salmon and tuna into your dinner rotation if you want to live an extra decade or two. According to clinical research published in The American Journal of Medicine, each 100 gram serving of fish is associated with a 5 percent reduced risk of developing heart failure.

You don't have to forget, but if you want to live a long life with minimal health complications, then you'll have to at least learn to forgive. According to research from the University of California, Berkeley, holding onto a grudge increases your blood pressure and heart rate—so for the sake of your mental and physical health, you need to learn how to let things slide.

Happier people not only live better lives, but longer ones, too. That's according to research from Yeshiva University, which found a direct correlation between optimism and longevity.

The same research from Yeshiva that linked optimism to a longer life also found that enjoying laughter contributed to a lengthy life span.

15
Embrace the Idea of Aging

Want to extend your life without expending too much energy? Just accept that aging is a natural part of the process. According to one study published in the Journal of Personality and Social Psychology, older individuals who maintained a positive attitude about aging lived nearly 8 years longer than those who saw it with a negative outlook.

Even if watching Netflix shows is your absolute favorite activity, you should work on keeping your bingeing to a minimum. When Australian researchers analyzed data from more than 11,000 adults, they concluded that people who watched an average of six hours of television per day lived nearly five years fewer than those who steered clear of cable.

It's well-known that exercise is good for the mind, body, and soul, but running in particularly might be the secret to living a longer life. In fact, according to research published in the journal Progress in Cardiovascular Diseases, people who run lived nearly three years longer than those who skipped out on the workout, and every hour of running adds seven more hours to your lifespan.

Nuts as just as delicious as they are nutritious. In fact, the fruits are so good for you that one study published in BioMed Central found that people who ate at least three servings per week reduced their risk of death by 39 percent. 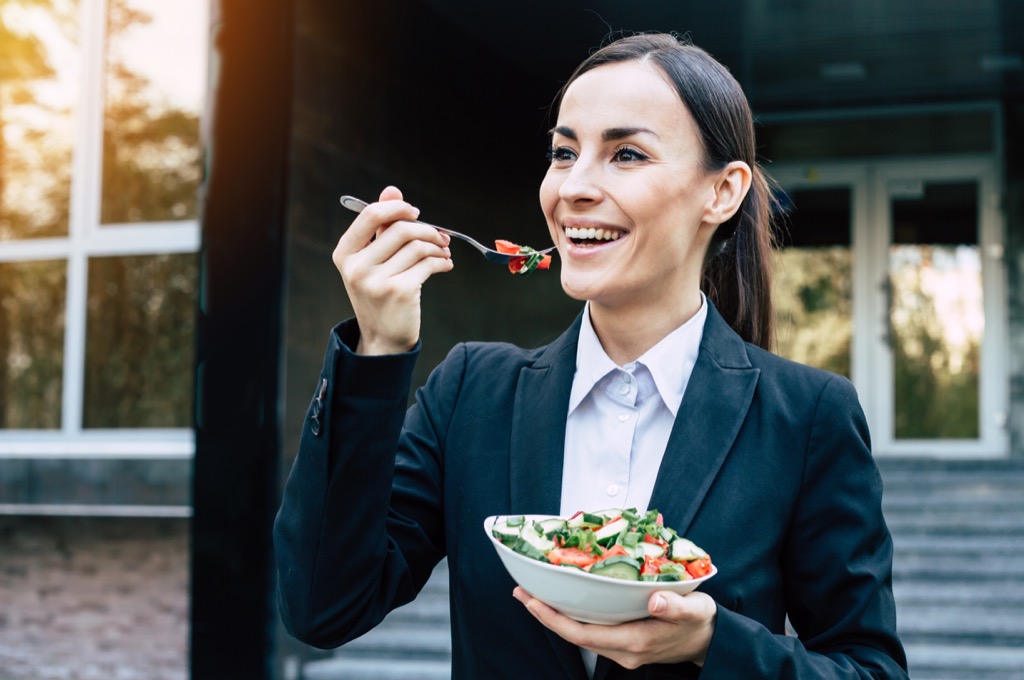 According to research published in Rejuvenation Research, study participants who followed an intermittent fasting routine—compromised of eating for six days and fasting for one—saw an increase in levels of SIRT 3, a gene linked with boosting longevity.

20
Surround Yourself with Loved Ones

One is the loneliest and most unhealthy number, according to researchers from Brigham Young University. When they analyzed several studies, they found that loneliness and isolation caused an increase in mortality of up to 32 percent, making them just as detrimental to a person's lifespan as obesity.

If you want to save money and live longer, then consider taking advantage of your kitchen more. One study published in the International Journal of Behavioral Nutrition and Physical Activity found that people who ate home-cooked meals more than five times per week were 28 percent less likely to have BMIs in the overweight range compared to those who cooked less than three times per week. 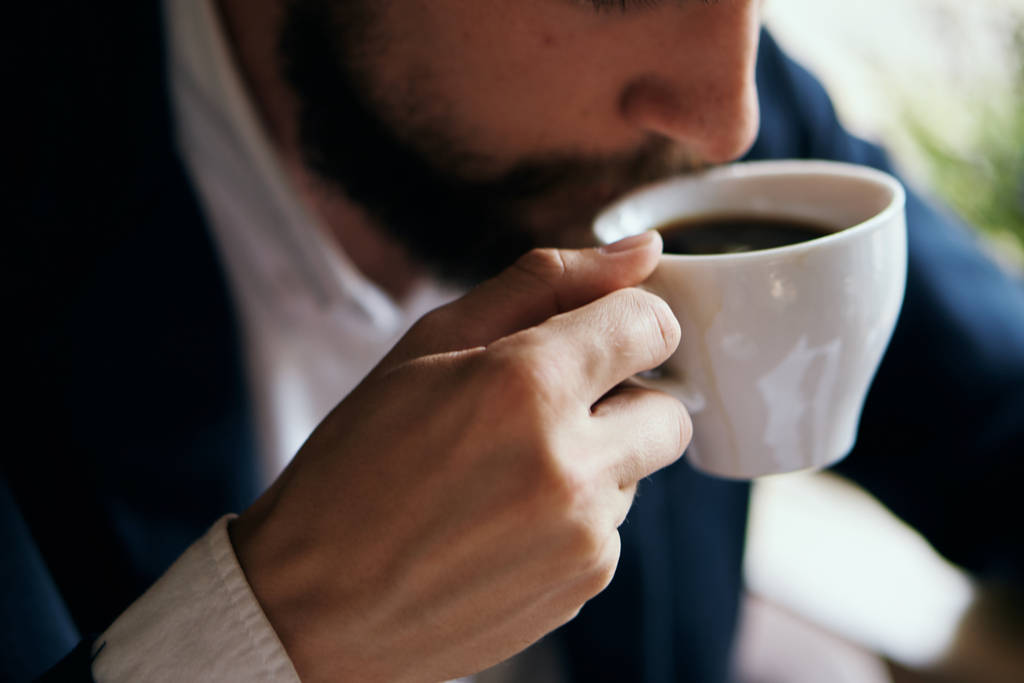 Good news for coffee drinkers: According to research published in the journal Annals of Internal Medicine, people who often sipped on the drink (both in its caffeinated and decaffeinated forms) lived longer than non-java drinkers.

It might not feel like it matters, but drinking an adequate amount of water every day is hugely important. When you drink enough water, you reduce your risk of experiencing everything from increased fatigue to coronary heart disease.

Forget what you've heard about cutting carbs out completely. When researchers tracked 15,000 Americans for 25 years, they found that it was the people who ate a moderate amount of carbs (with 50 to 55 percent of their calories coming from them) lived four years longer than those who followed low-carb diets.

25
Chat Up Your Coworkers 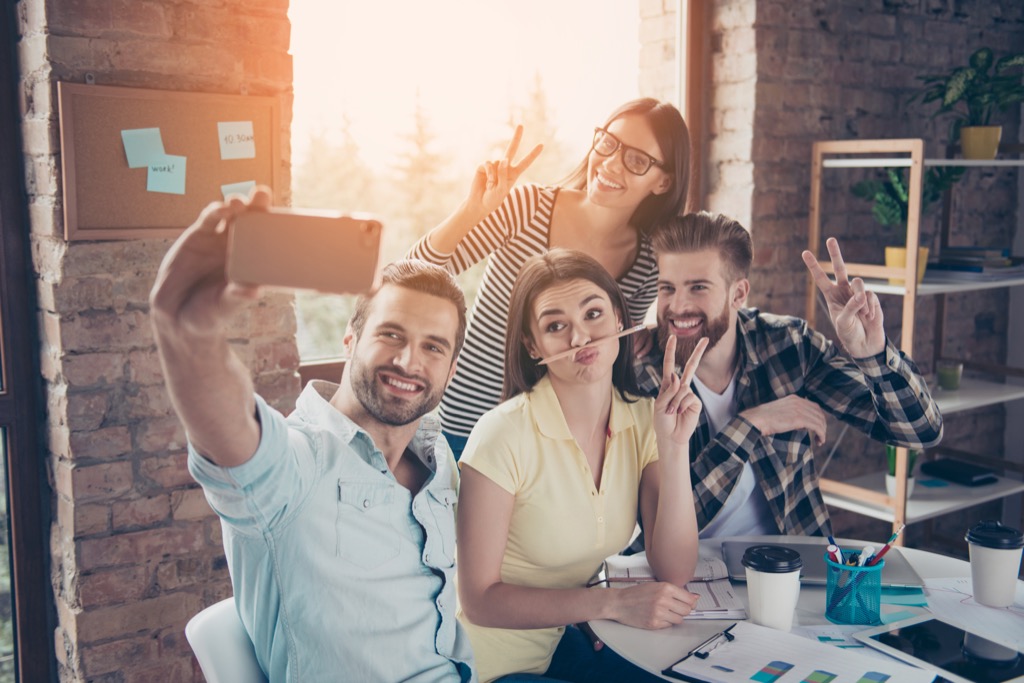 Who says work has to be all business and no pleasure? Befriending your coworkers makes the workday pass by much more quickly—and based on research from Tel Aviv University, it may also help you live longer. 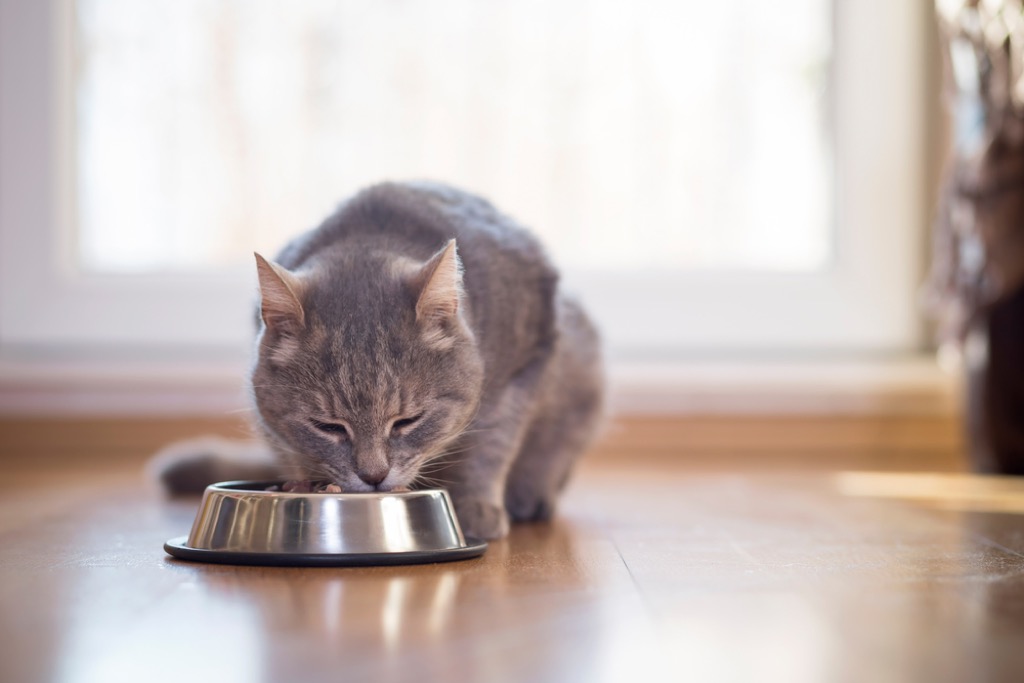 Owning a pet lowers stress levels, thereby reducing a person's risk of suffering from heart problems. In fact, based on research from scientists at the University of Minnesota, cat owners were 43 percent less likely to suffer from heart disease compared to their feline-free counterparts.

If you prefer dogs over cats, then don't fret: Another study published in the Journal of Scientific Reports concluded that owning a dog also reduces your risk of dying of cardiovascular disease by 36 percent and your risk of overall death by 33 percent.

Smoking is an addiction that is by no means easy to erase, but if you want to live a long and healthy life, you should work toward cutting the bad habit out as soon as possible. According to the Centers for Disease Control and Prevention, cigarette smoking is responsible for up to 90 percent of lung cancer cases in the United States, and overall mortality among smokers is three times higher than that among non-smokers.

Drinking in moderation is acceptable (and even fun), but it's when the habit becomes uncontrollable that it turns into a health hazard. According to the National Institute on Alcohol Abuse and Alcoholism, people who drink in excess are 1.5 times more likely to develop colorectal cancer—and that's just one of many possible complications. 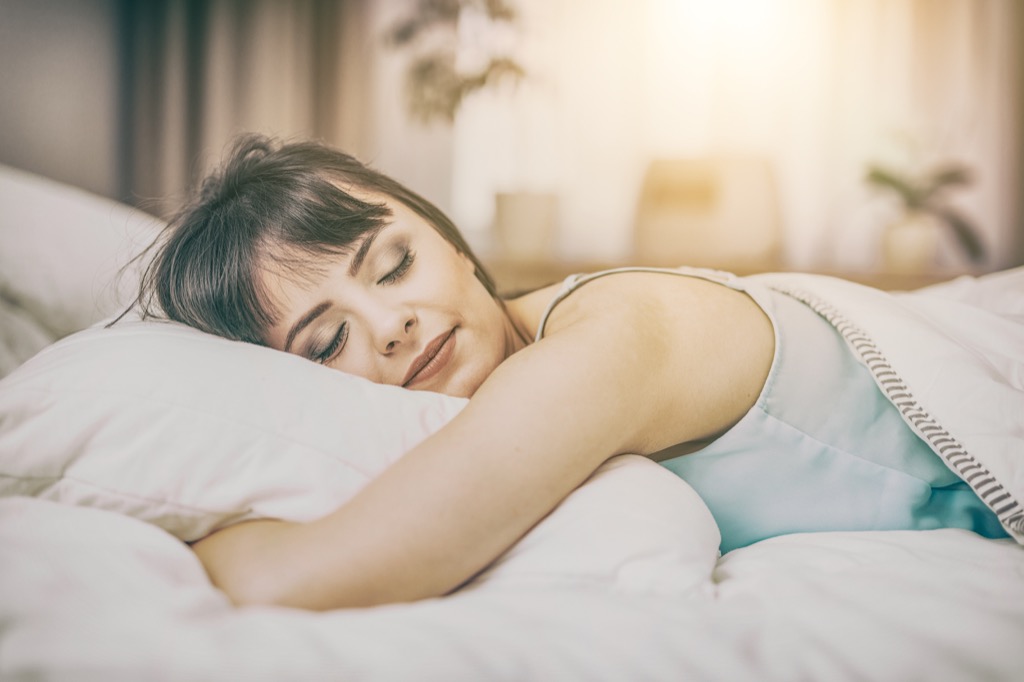 You might be tempted to skip out on a few hours of sleep in favor of staying late at work or shortening your to-do list, but this decision comes with serious consequences. When researchers analyzed data from 16 studies, they concluded that people who get fewer than six hours of sleep per night are 12 percent more likely to die early than those who get the recommended amount.

Getting too much sleep is actually more harmful for you than not getting enough. The same researchers found that people who slept more than 9 hours per night were 30 percent more likely to die prematurely than those who got the typical 7 or 8 hours.

In case you need a reason to have more sex, one study of more than 1,100 men found that those who had sex just once a month had a 45 percent increased risk of cardiovascular disease compared to their more sexually active counterparts.

33
Use Your Vacation Time

Going on a luxurious and relaxing getaway is a great way to relieve stress, soothe the soul, and improve your perceived quality of life, all of which can contribute to your overall wellbeing.