The Startling Ways Loneliness Can Destroy Your Health

For starters, it doubles your risk of premature death.

It's a paradox of the modern age. In spite of the fact that human beings today have more means of communication than ever, people are lonelier than ever. A recent report by Cigna found that almost half of Americans feel lonely almost all of the time, and the loneliness score was especially high among people who are between the ages of 18 and 22. Over the weekend, the European Society of Cardiology presented a study on how loneliness impacts our physical health at their annual nursing congress, EuroHeartCare 2018. The following are some of their key findings. And for more on the importance of mental health, check out these 20 Expert-Backed Ways to Improve Your Mental Health Every Day.

1
It's Terrible for Longevity

In analyzing 13,463 people with various heart problems, the researchers found that loneliness doubled the risk of premature death in both men and women. It's true that people who are lonely are more likely to engage in harmful behavior, such as smoking and substance abuse, which shorten one's lifespan. But what was interesting is that the researchers found that the risk of premature death was the same even when adjusting for age, level of education, other diseases, body mass index, smoking, and alcohol intake.

Previous research has found that people who feel lonely have a 29% higher risk of having heart disease and 32% higher risk of having a stroke than those who do not. Again, while some of this is due to the bad habits loneliness tends to engender, much of this increased risk for cardiovascular disease stems from the high blood pressure and inflammation that comes from feeling sad and stressed out. This has led some studies to claim that loneliness can have a similar effect on your heart as smoking 15 cigarettes a day.ae0fcc31ae342fd3a1346ebb1f342fcb

3
It Causes Anxiety And Depression

The European Society of Cardiology study found that men and women who reported feeling lonely were also three times more likely to report feelings of anxiety and depression. Lead author Anne Vinggaard Christensen said that while "loneliness is more common today than ever before," living alone and being lonely are not the same thing. As mentioned before, young adults, many of whom reside with friends or family, are the loneliest age group in America, a perplexing statistic that many blame on the rise of tech addiction. After all, recent studies have shown that people who admit to being addicted to their smartphones score much higher on depression and anxiety scales.

4
It's Particularly Hard on Men

The suicide rate among Americans aged 35 to 64 increased nearly 30 percent between 1999 and 2010, and the numbers were especially bad among men in their fifties, whose rates increased by nearly 50 percent. Many sociologists believe that this increased rate is due to the fact that men have fewer close friendships that women, leading to the conclusion that men who feel lonely or isolated have an even greater risk of death than people who don't exercise or are clinically obese. And to educate yourself on the horrifying realities of suicide, be sure to know the Suicide Warning Signs Hiding in Plain Sight.

5
It Increases Your Risk of Suicide 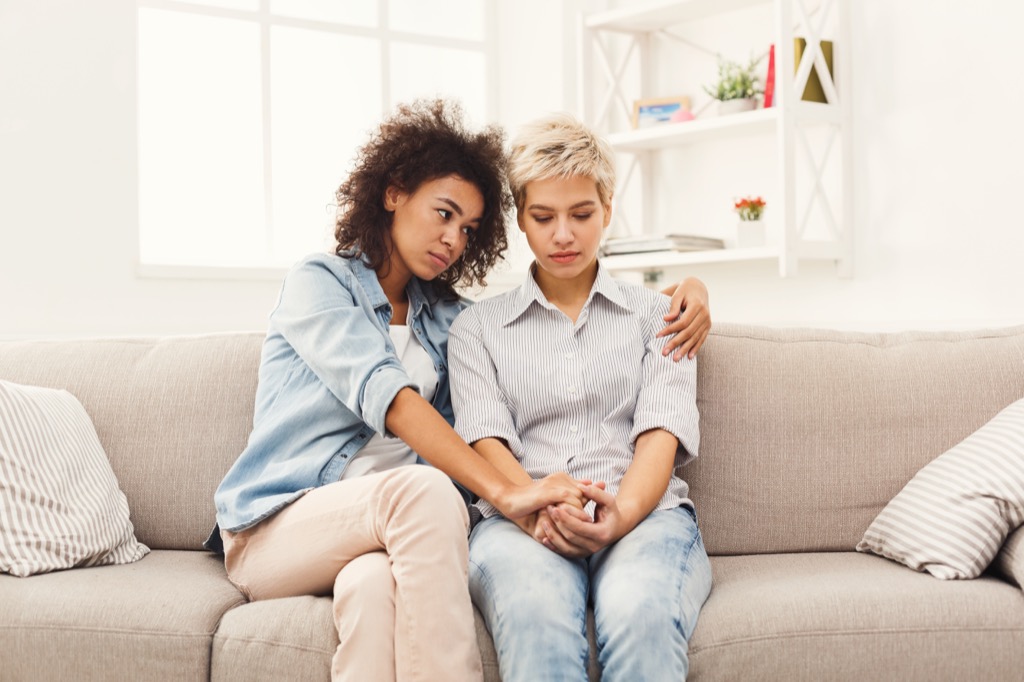 Feeling socially isolated has long been identified as the main impetus for suicide. In a mega-thread on Reddit following the tragic deaths of Kate Spade and Anthony Bourdain, users who decided to kill themselves and then changed their minds nearly universally cited a friend, family member, or pet as the reason they stopped. Just as loneliness can kill, reaching out to others can save lives.

Studies have found that even doing something as simple as holding hands with someone can actually reduce physical pain in the body. And even though social media often increases social isolation more so than the other way around, some studies have found that online forums about depression can also help create a constant support net from strangers. Whatever you do, don't suffer in silence. There are too many people out there that love you, and too many people who will love you that you haven't even met yet.

Diana Bruk
Diana is a senior editor who writes about sex and relationships, modern dating trends, and health and wellness. Read more
Filed Under
Mental Health
Read This Next
Latest News
Read This Next